If you want to learn the drums fast, let Sheila E teach you. Her 15 video masterclass, takes you quickly through everything you need to know to get started regardless of what genre of music you want to play.

Why Sheila E is the perfect drum instructor for you

Drumming is in Sheila E´s blood. Her father is the world-renowned percussionist Pete Escovedo. She spent her early childhood sitting at the side of the stage as her dad played in clubs, while her mum worked nights at a local dairy.

It is no exaggeration to say that Sheila was born to play. In her masterclass, she shares a memory of being less than 4 years old and trying to play like her father. Fairly soon, she was filling in for under the weather members of her father. By the age of 20, she was playing drums for the likes of Diana Ross and Marvin Gaye.

When Prince spotted her performing in 1978, he was determined to work with her. Which he did in 1984, with Sheila providing most of the drum backing for his Purple Rain album. But, by that time, she was a celebrity in her own right, performing at sellout concerts in Europe and the US.

There is no doubt that Sheila E has a wealth of knowledge to share with her students. Something she does really well. Whether you want to become an accomplished drummer or not, you are going to enjoy this Masterclass. I did.

According to Sheila, everyone has rhythm. The rhythm counter in the top corner was really helpful in helping me to pick up and follow the rhythm.  I also liked the little extra instruction bubbles that kept popping up. Her half time tip and walking the rhythm idea were especially good. If you have no experience of playing an instrument, I suggest that you go over this video a couple of times.

In this section, Sheila also helps you to realize that you can make music out of anything. When she says anything, she really means it, plus her workbook contains even more suggestions.

Drummers are the drivers of the band. We are the time keepers, the foundation. – Sheila E – Drum and Percussion Masterclass.com

Getting started with playing the drums

Even if you can only afford a set of drum sticks, you can still get started with learning to play the drums. Her suggestion to use a pillow is a particularly good one. You still get to practice your stick technique, get used to holding them properly, strengthen your wrists and practice your rhythm.

How to learn a drumbeat

For me, this was a tricky section of her class. I had to go over the video a few times before I could apply what she was teaching me to different kinds of music.

When you take the course, don´t do what I did and over complicate things in your mind. Just practice the 2 and 4 beats she is teaching you. Then experiment with different ways to use it.

These are the different drum beats she teaches you in this video:

She wraps all of this up, by breaking down the Samba beat. Again, I found her walking, running analogy to be really helpful in helping me to recognize, then break various beats down.

The dos and don’ts of playing drums in a band

Drummers are an important component of the band. Most of the time they are leading, keeping time and dictating the tempo. Doing all of this is complicated, but Sheila breaks it down into the following sections:

Growing as a bandleader

On a similar subject, Sheila goes through what it takes to be the bandleader. The practicalities of getting everyone to practice, try out new things, gel and grow as a band. If you play for someone you might want to skip this video. I didn´t and still found it interesting even though much of the material covered was not relevant to me.

On a similar note towards the end of her masterclass, Sheila E shares some tips for musicians. Having watched several of the other music-related masterclasses, I think Sheila´s advice is a little more honed and relevant to people who want to play professionally today. It is certainly worth going over this section a couple of times.

By the way, if you are curious about the other music-related masterclasses you can read my full reviews of the following :

They are full-blown reviews. If you prefer you can simply go to this page and read a short overview of the ones I liked best.

Not every drummer will fill comfortable playing solos. But, if you want to do it Sheila quickly goes over the basics of what is involved. Sadly, she doesn´t delve that deeply into the subject. But, there is a bit more information in the workbook.

However, she does fully explain how to use fills to lead the band. To help them to change direction, or join things together. She also demonstrates why sometimes, less is more. There are times when you will play just one beat, on one drum.

Training and conditioning for drummers

There is no doubt that being a drummer is physically demanding. So, it was good to see Sheila cover this subject in her course. She touches on it throughout the videos. For example, in her video about warming up, she says that her left arm takes longer to warm up than her right. Then went on to explain how she deals with this potential issue using certain exercises.

But, in the training and conditioning video, she delves much deeper into the subject. You even get a glimpse into her pre-show preparations. While watching her it struck me that drumming must have played a significant role in keeping her fit and healthy. She was born in 1957, yet still moves and plays as vigorously as she did when I used to follow her music in the 80s.

How to play the congas

I am most definitely not a fan of the congas. No idea why, but they annoy the hell out of me. But, knowing I was writing this review pushed me to watch this section too and it was better than I expected. In this video, Sheila covers the following:

If you can read music, you can go to the band practice section of the workbook and play what Sheila shows you in each video. Including the conga rhythms, each member of Sheila E´s family plays during their freestyle conga demonstration. If you don´t read music, don´t worry, you can still go to the relevant section and just play along.

How to play the Timbales

Playing the timbales is something I have never tried. I think it is the idea of the cowbells and the fact that they are mostly used in Latin music that switched me off when I was younger. So, again I was resistant to watching this section of the course.

But, I made the ultimate sacrifice for you guys and watched it right through. And I was glad that I did. I learned a huge amount. It really opened my eyes to the possibilities.

Sheila often plays them. She explains that she finds that it gives her the freedom to sing and move more. Plus, as you will see when you take the course you can produce an amazing range of sound when you play timbales.

OK, I will stop eulogizing now and give you an overview of what Sheila covers in this section of the course. Here you go:

Sheila does far more than just play other people´s music. She creates it too, so it came as no surprise to me that she likes to experiment. You get to watch her doing exactly that in her experimenting with percussion video.

For a beginner, it will be more interesting than instructional. But, I suspect the more advanced musicians amongst you will get quite a bit more out of this section.

Why I recommend Sheila E´s Drumming and Percussion Masterclass

If you have ever fancied playing a musical instrument and thought you could not do it, think again. With the help of Shelia E´s drumming masterclass, you will be playing in no time. She does not mess around and bog you down with details. Instead, she quickly teaches you the basics and provides you with ways to get going. Using her methods you can get started even if you do not own a single drum.

Something for Sheila E fans

I have always liked Sheila E, so was delighted to learn more about her work and music. So really enjoyed those videos that provided more of an insight into her career.

In particular, her “A Love Bizzare” case study and the Collaborating with Prince sections. If you are not a particular fan of her work you might want to skip through these videos. Although, I suspect that if you do that you will miss out on a few golden nuggets of information you can potentially use to improve your playing. 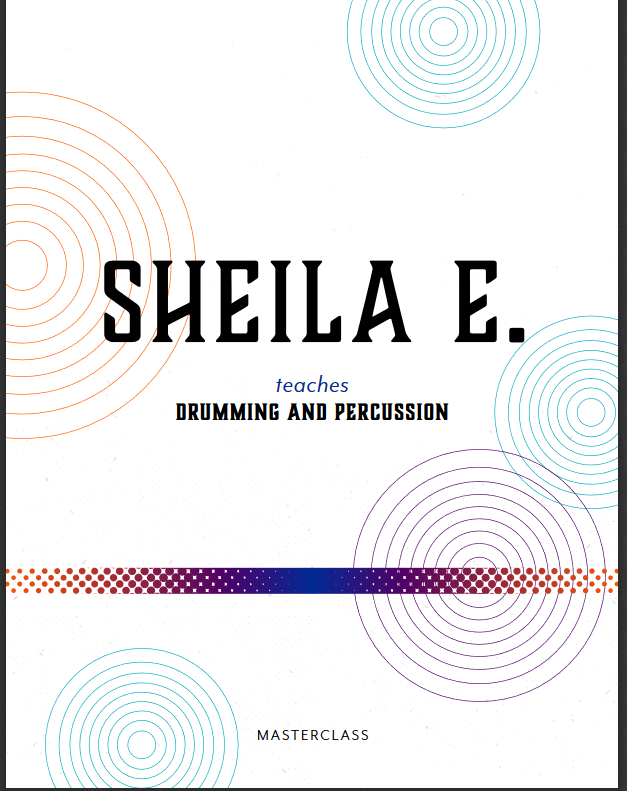 The workbook is good. It does not exactly follow the order of the course, which is a bit of a shame because you cannot use it to quickly find something you want to go over again in the videos. But, nonetheless, it is still good. There are plenty of extra exercises for you to do plus other useful information. For example, a map of the main world rhythms with a track for each that you can listen to. It is a great way to grow your understanding of rhythms and find tracks to help you to practice.

In conclusion, my advice would be to treat yourself to a Masterclass pass and start enjoying the many music classes that are available. Including Sheila E´s drum and percussion Masterclass.